Here are some interesting stories published elsewhere on the web in the past twenty-four hours. Feel free to discuss them in the comments or let us know if we missed anything:

After a lot of hope following the election of President Barack Obama, the Employee Free Choice Act (EFCA)–a measure aimed at making it easier for workers to form unions–seemed destined for failure in March. A key Republican Senator–Arlen Specter–withdrew his support for the bill and a group of CEOs offered an alternative proposal that would effectively neuter the bill by removing a key provision–“card check”–that allows workers to form a union once a simple majority of workers support it.

However, there are recent indications that the fight for the Employee Free Choice Act is back on track. According to an article in Roll Call, months of negotiations in the Senate (http://www.theittlist.com/site/ittlist/ind/5456/) are starting to pay off with some sort of deal apparently being near. Senator Tom Harkin says that the bill may be ready by next month. The newspaper further reports that Specter is now looking for a way to support the legislation in order to fend off a Democratic challenger in the next election.

While negotiations are taking place in the Senate, unions are also increasing their efforts in support of the legislation. The Service Employees International Union (SEIU) has launched an ad campaign targeting five Senators whose votes are considered key in the passage of the Employee Free Choice Act. The ads assert that the vote for the EFCA is a choice between supporting working people and the greedy CEOs that were responsible for the current economic crisis.

Hopefully grassroots pressure from labor and social justice groups can keep the Employee Free Choice Act intact, but with how recent “compromise” efforts seem to be going on things like war funding and global warming legislation, I’m not terribly optimistic.

Here’s some interesting Grand Rapids and Michigan headlines from today and over the weekend:

Here’s some interesting articles pertaining to Grand Rapids and Michigan from elsewhere on the Internet:

If we missed anything, let us know in the comments. 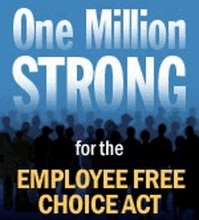 A new study by labor expert and Cornell University Professor Kate Bronfenbrenner has found that employer opposition to labor unions has intensified in recent years and has become more punitive.

The new report–titled “No Holds Barred: The Intensification of Employer Opposition to Organizing“–looks at five years of employer behavior in elections supervised by the National Labor Relations Board (NLRB).

The study found that it is standard practice for workers to be subject to threats, interrogation, harassment, surveillance, and retaliation for union activity. In campaigning against unions, corporations frequently engage in a combination of the following tactics:

Bronfenbrenner compared the results of this study to past studies and found that employers are using a combination of ten common anti-union tactics in 49% of unionization drives, up from 26% twelve years ago.

The report also looks at the difference between private-sector and public-sector unionization rates. In the public-sector, 37% of workers belong to unions compared to just 8% in the private-sector. Public-sector workers often have more freedom to form unions as coercive anti-union tactics are considerably less common. In many cases, they can form unions through a majority sign-up process rather than through elections.

The report blames employers’ anti-union tactics for driving down the unionization rate to 12.4% in the United States.

Bronfenbrenner’s study and its conclusions will likely contribute to the ongoing debate over the Employee Free Choice Act (EFCA). The Act would make it easier for workers to form unions and would reduce the advantages that employers currently hold (such as using anti-union intimidation tactics). Moreover, it would mandate that contracts be signed quicker and allow unions to be formed either through the elections process–which has been thoroughly manipulated by corporations over the years–or through a majority sign-up.

Not surprisingly, the Employee Free Choice Act has been opposed by major corporations and business groups, including some here in West Michigan. The United States Chamber of Commerce rejected this study, saying that it was skewed in favor of labor, although it was peer-reviewed by other academics in the field.

Over the past several years, MediaMouse.org has regularly reported on efforts aimed at organizing Starbucks workers both here in Grand Rapids and around the country. The Starbucks Workers Union just celebrated its fifth anniversary despite an ongoing campaign of anti-union intimidation by Starbucks.

Since the union’s formation, Starbucks has been convicted multiple times of violating the National Labor Relations Act. At the same time it is waging this aggressive anti-union campaign, Starbucks is also working to prevent the passage of the Employee Free Choice Act, a measure that would make it easier to form unions. The Act would also increase sanctions against companies like Starbucks.

Brave New Films has produced a very good short video that looks at organizing efforts at Starbucks and the company’s anti-union behavior:

In addition to the film, Brave New Films has also launched a new website, StopStarbucks.com that aims to place the company under increased scrutiny.

As part of the new website, there is a petition that demands that Starbucks allow its employees to form unions and asks that it stop opposing the Employee Free Choice Act. Signing it is a great way to follow-up on the organizing done by the Grand Rapids Starbucks Workers Union.

Here are some interesting stories from the past 24 hours:

If we missed anything, let us know.

The Starbucks Workers Union–which has been active here in Grand Rapids–celebrated its fifth anniversary on May 17. To commemorate the union and its organizing efforts to improve conditions for Starbucks baristas, the Union issued the following statement:

May 17, 2009 marks five years since baristas at a Starbucks in New York City announced their membership in the Industrial Workers of the World and launched a campaign open to employees throughout the company. A worker-led organizing effort with the legendary IWW at the world’s largest coffee chain could have been a flash in the pan- brilliant and inspiring, but brief. But a fire was lit and a movement began. The idea that Starbucks workers could organize themselves and speak in their own voice, independent of company executives and union bureaucrats, could not be restrained.

The bosses did their best to defeat us, to bury any indication of our existence under a heap of lies and retaliatory firings. They tried to stamp us out, even as the campaign for secure jobs and a living wage burst from New York into Illinois, Maryland, Michigan, Minnesota and beyond.

While Starbucks used the economic crisis as a pretext for an all-out assault on our already meager standard of living, our struggle gained momentum this year amidst a stark decline of the company’s brand and widespread store closures. Baristas around the country and around the world made the decision to organize and fight back against severe cuts in work hours, chronic under staffing, and a new “Optimal Scheduling” program which forces many workers to be available to Starbucks for over 80 hours a week without being guaranteed a single work hour.

This journey has been full of set-backs and tests of will. Progress has been made yet much remains to be done. But one thing is certain: our voice for dignity is firmly planted and our union’s future is bright.

The biggest battles remain ahead, but every day our ranks deepen. We are confident in our solidarity and could not be more proud to be associated with our fellow workers across the IWW and like-minded unionists around the world. This year, courageous baristas in Chile became the first Starbucks workers in Latin America to raise a union banner.

The corporate-controlled economic, social, and political model has been exposed everywhere as a failure for working families. And everyday workers are bolder and more assertive in the fight against injustice and exploitation. The notion that democracy has no place at work has been exposed as a lie.

To every worker who loves liberty: this is our time!

Here’s some interesting articles covering Grand Rapids and Michigan that were published in the last twenty-four hours:

Today is May Day, a day that around the world is celebrated as a celebration of workers’ rights and the power of collective action. In Europe, protestors celebrated the social and economic gains of the labor movement, while also criticizing the world’s elites over the economic crisis.

In the United States, we’ve largely forgotten that history with May Day’s relationship to workers’ rights being scrubbed in the 1950s hysteria over communism and instead christened “Loyalty Day”.

When we lost that history, working people lost part of an inspiring history of grassroots action. Things like the 8-hour day, the end to child labor, and the right to collectively bargain all came out of the struggles of unionized and non-unionized workers and their allies. Radical historian Howard Zinn said in a recent interview:

“Think back to 1886,” he urged, ” … that last part of the nineteenth century, when corporations were growing more and more powerful … And workers were working ten, twelve, fourteen hours a day in factories, and mills, and mines.” “Particularly in the period, in the 1880s, workers decided they would have to win the eight-hour day by their own efforts, by direct action, by going on strike. And they did, they went on strike all over the country. And the result was, they did win the eight-hour day in many places at that time.”

“It wasn’t written into law … until the 1930s, until the New Deal. But it was the unions, the strikers, who did it first. And so it’s very important to understand that May Day is a symbol of protest against terrible working conditions, and of workers’ solidarity to change that.”

So celebrate today as a day of power, and more importantly, (re)commit yourself to the struggle for social justice. Join a progressive group in West Michigan, call your legislators in support of the Employee Free Choice Act (which would make it easier for workers to form unions), or start a new group or project. History shows us that we have the power to change things–we just need to make the effort.

It’s also worth noting that in recent years, May Day has had a resurgence in the U.S. as a day of protest in support of immigrant rights. Since 2006, massive protests have taken place annually in cities across the United States that have in many cases link immigrant rights and workers rights and forged a broader sense of solidarity across movements.