A Michigan leader and member of the Ku Klux Klan is involved in Republican presidential candidate Ron Paul’s Michigan campaign according to a recent article published at DailyKos.com. The Klan member–Randy Gray–was listed as campaign coordinator for the city of Midland. 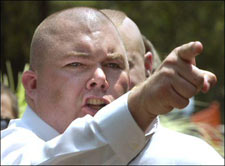 A Michigan leader and member of the Knight’s Party faction of the Ku Klux Klan is involved in Republican presidential candidate Ron Paul’s Michigan campaign according to a recent article published at DailyKos.com. The Klan member–Randy Gray–was listed as campaign coordinator for the city of Midland. 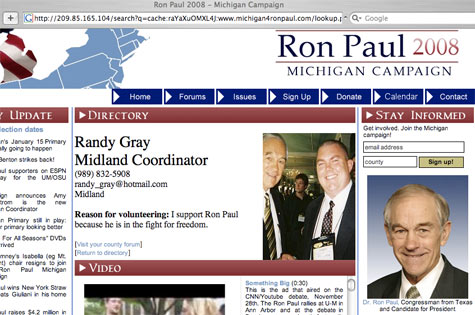 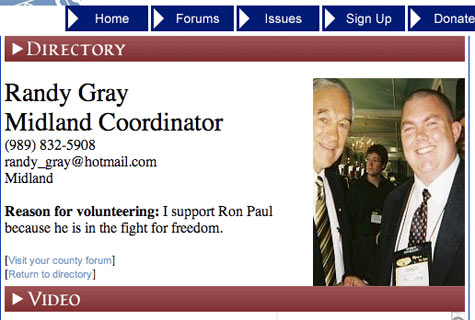 Gray–who posts on the racist website Stormfront.org–recently described his campaign activities on behalf of Paul: 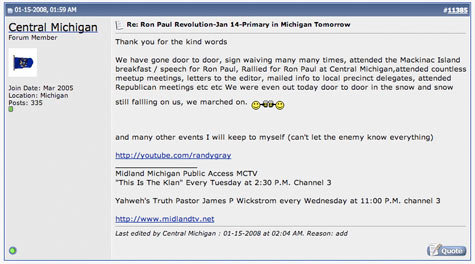 According the post, Gray has gone door-to-door, organized rallies, and attended meetings. Similarly, the post makes quite clear Gray’s connections to the Ku Klux Klan, with it listing the airtimes for the “This is the Klan” program that he airs on Midland public access television as well as a reference to Michigan-based “Pastor” James Wickstrom. Wickstrom is a Christian Identity (a white supremacist religion) preacher who has advocated the annihilation of the Jewish people.

Back in July, Media Mouse profiled Gray before he spoke at a rally in Kalamazoo organized by the prominent racist radio host Hal Turner. We documented Gray’s longtime involvement with the Klan and his history of racist and homophobic statements. As an example, it is worth noting that Gray has referred to people of color as “savages” and “animals:”

“… [S]o many of these savages, according to our statistics, they’re murdering our people, on a daily basis, and there’s nobody in our legal system that would dare say, “Bring back the rope! Bring back the electric chair!” Instead, they take our tax dollars and they feed these animals at the cost of our race!

Yes, ladies and gentlemen, you have been lied to about diversity and multiculturalism. The immigration crisis that’s being pushed upon us by the race traitors of Washington, D.C. — they don’t care about our people, they’re too concerned about the homosexual rights! They’re too worried about protecting the rights of the Highlander communist school in New Market, Tennessee, that pushes this immigration, this race problem in our nation today — comes right out of the communist school. It was closed down originally in 1960 by the state of Tennessee, but they are in New Market, Tennessee, and we were up there yesterday taking photo pictures.”

According to the author of the original piece on DailyKos.com, Paul’s campaign has had no comment on the involvement of a Ku Klux Klan leader with the campaign. Over the past several months, the campaign has repeatedly downplayed Paul’s connections to the racist right and allegations of his own racism.

Last Saturday, United for Peace and Justice’s regional antiwar mobilization in Chicago drew an estimated 5,000 people. However, aside from the fact that multiple marches were held around the country in lieu of in one central location, it largely repeated past marches with similar effects. 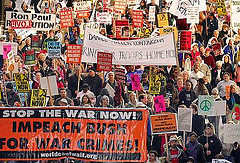 Last Saturday, October 27th, roughly 5,000 people gathered in Chicago as part of a regional march against the Iraq War. This march was organized by a coalition of groups including United for Peace and Justice, ANSWER, and World Can’t Wait.

The student feeder march began assembling at 525 State Street in front of an Armed Forces Career Center. About two-dozen police on bikes were stationed at the Career Center well before people began to assemble. Around 1:30 the organizers of the march allowed some people to address the crowd of about 60 people. Members of SDS, World Can’t Wait, as well as a passerby who free-styled into the mega phone, addressed the crowd in order to build energy. The march then left the Career Center and marched on the sidewalk though various shopping districts of Chicago chanting things such as “while you’re shopping bombs are dropping”, “The people of Iraq are under attack, what do we do? Stand up fight back”, and “stop the war yes we can, SDS is back again.” The group attempted to take the streets as they neared Union Park.

The police who had followed the group in the road responded by shoving protesters onto the sidewalk with their bikes. Most of the group responded by moving to the sidewalk and trying to take the streets again when the police moved back. During this police grabbed the flag of one member of the march that resulted in some pushing and pulling. The police eventually let the person go and the march continued on its way. During the next attempt to take the street the police targeted the same person with the flag and pulled them into the road and arrested him using three officers. During this time the group responded verbally to the force used by the police. The police responded by pulling out their batons and using their bikes aggressively to control protestors. The police reported that protestors damaged a bike in this scuffle, however, police threw down their bikes and stepped on them themselves during this scuffle. The group continued on its way after the first arrest, but the police then made two more arrests while the group crossed the street on the sidewalk. This again contradicts reports claiming that all three protestors were arrested while running into the street. Several police hit one of the arrestees with their batons and tackled them while they screamed in pain. The arrestee then had to be carried off from the scene, as they appeared to be unable to walk at the time. After the attack by the police, the march continued on to Union Park much less energetic than it started. As the group approached the park to meet with the rest of the main march they chanted, “war and occupation can never bring liberation, that’s bullshit, get off it, this war is for profit.”

The attack by the police caused the student feeder march to arrive late for the rally at Union Park, resulting us missing the majority of the rally. After a music performance by a local hip-hop artist, the gathering began to march through the streets of Chicago. The group that made up the main march consisted of dozens of smaller groups that brought people to the march.

Oddly, one of the largest and most visible groups in the main march was the Ron Paul campaign. This group had various slick looking signs and even hired a plane to fly over the main march with a large banner calling for people to elect Ron Paul in 2008. This support of a politician is troubling for numerous reasons. In 2004, the anti-war movement adopted an “anybody but Bush” stance and threw their support behind John Kerry, a candidate that did not represent the interests of most of the anti-war movement, or even the interests of most Americans. Because of this the anti-war movement redirected much of its energies into Kerry’s campaign causing it to lose much needed energy.

Even more troubling than the potential to repeat the mistakes of 04 is the stance of Ron Paul. Running on a Republican ticket using libertarian values, Ron Paul is attempting to appeal to a variety of interests by claiming to want to end the war as well as implement a system that would benefit mainly the rich by doing away with many social programs. Aside from supporting free market economics which have all but destroyed many nations in South and Central America, Ron Paul takes an extremely conservative approach to immigration policy claiming that we need to end birthright citizenship and physically secure our borders and coastlines.

Paul’s immigration policy is not the only questionable position he holds. On gay marriage Paul claimed, “If I were a member of [a state] legislature, I would do all I could to oppose any attempt by rogue judges to impose a new definition of marriage on the people of my state” as well as “We do know what marriage is about. We don’t need a new definition or argue over a definition and have an amendment to the Constitution.” Ron Paul also has stated in 1981 that “Abortion on demand is the ultimate State tyranny; the State simply declares that certain classes of human beings are not persons, and therefore not entitled to the protection of the law.” Ron Paul’s anti-immigration, anti-gay marriage, and anti-women positions should speak for themselves, however, yet many members of the left continue to endorse Paul simply because he is against the Iraq war. Such narrow criteria for support will undoubtedly result in troubles for many Americans should the Ron Paul “revolution” come to be. Again, members of the left need to take off their blinders with regards to Ron Paul and recognize that he is not a friend of the left.

The Rest of the March

The student group attempted to stay close together during this march, but it became difficult in a group of 5,000. Police presence though out the early part of the march was minimum. As the group came into the business districts police presence continually increased. Riot police wielding thick wooden clubs and facemasks guarded various corporate stores such as the Gap, McDonalds, and Starbucks. It appears this was done in order to prevent members of the march to partake in property damage. The fear of this may have been heightened by the recent events at the World Bank and IMF protests in Georgetown where a march broke several corporate store windows before being dispersed. The police did not interfere with the main march and it reached its destination for the second rally at the Federal Plaza.

Despite drawing in 5,000 participants, it is unlikely that this march will have any real effect on the Iraq war. As many Saturday shoppers lined the sidewalks and took pictures, the main march felt more like a parade than an expression of dissent. Participation in the march came from groups who are already involved in anti-war organizing. The entire event was well-scripted and did not interfere pose any real threat to those who hold the power to make war. The march vaguely demanded, “troops out now” but possessed no real power to influence those who can make that decision to do so. Like many events that failed to do much stop the war before and after it started, this event focused on mass numbers, bringing people together, and making vague demands to an elite that clearly is not listening.