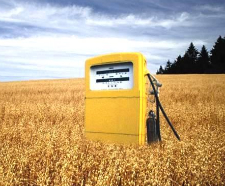 In recent years, there has been an increasing amount of attention placed on global warming. From the focus on “green jobs,” to “sustainability,” and “clean energy” there has been a lot of talk about what to do to address the problem. Much of this talk has centered around finding ways to “address” the problem while maintaining the current levels of production and industrialization, something which I just can’t see happening. If the underlying system is inherently destructive, it’s hard to image that giving it a new “green” coating–say with wind power instead of coal power–is really going to make that much of a difference if we maintain the ideology of unlimited growth.

Yesterday, the Grand Rapids Press published an editorial that advocated the passage of a bill that would allow small-scale ethanol plants in Michigan. Ethanol–one of the great false solutions to global warming–requires growing plants to provide fuel. According to the Grand Rapids Press, not only would this help Michigan’s farmers remain economically sound, but it would also be an important step towards a renewable energy future:

Ethanol is the most common biofuel. An efficient, renewable fuel source that proves less expensive is good for Michigan’s economy and the national effort to break our foreign-oil dependency. There are not many farmers currently engaged in small-scale production, but fluctuating energy prices and better technology could lead to more interest.

Unfortunately, biofuels really aren’t anywhere near sustainable. To run every vehicle in the United States on biofuels, you would have to dedicate the entire country’s agriculture output to fuel. Moreover, growing such crops relies on–and would likely expand–the destructive industrial agricultural system. That agriculture system–as well as ethanol production–is powered by fossil fuels.

Other ‘innovative’ solutions, like biofuels (which are mentioned in the ‘Clean Energy Dialogue’), have a terrible human cost. In 2007, the United Nations special rapporteur on the right to food called biofuels, which are made from food crops like wheat and corn, a ‘crime against humanity.’ According to the Earth Policy Institute, the grain needed to fill the gas tank of an SUV could feed one person for a year. Biofuels are already taking food out of the mouths of people. In 2008, approximately one-third of the US corn crop went to biofuel. Last year the United Nations World Food Programme also warned that it lacked the resources to keep up with rising food prices which it attributed, in part, to biofuels.