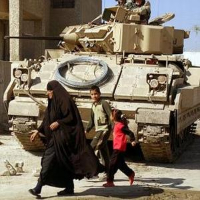 Democratic negotiators have reached a compromise on a supplemental spending bill that will continue to fund the U.S. wars in Iraq and Afghanistan. The bill–which had become the source of unexpected controversy after provisions to fund the IMF and to ban the release photos showing abused detainees–is now back on track for passage according to several media sources.

The “compromise” has nothing to do with the funding of the two wars–which the Democratic leadership is more than happy to do–but rather it focuses on President Barack Obama’s commitment to block the release of the detainee photos. Obama personally intervened in the debate over the bill and said that he will do everything he can to make sure the photos are never released.

A further compromise was reached on the question of trying Guantanamo Bay detainees in the U.S., with the bill giving Obama the ability to order detainees back to the U.S. for trial through September 30. It sidesteps the larger question about what to do with the detainees over the long-term.

The bill also includes $7.7 billion for fighting swine flu, $1 billion dollars to be use for an incentive program to get consumers with inefficient cars to turn them in for vouchers towards more efficient cars, and $5 billion to establish a $100 billion line of credit for the IMF.

What’s notably absent from the “compromise” is any discuss of the war funding. There are no measures aimed at curtailing the Obama administration’s capacity to maintain the two occupations.

Two anti-war lawmakers in the House of Representatives–Dennis Kucinich and Lynn Woolsey–are calling on opponents of the war to reject the compromise and maintain their opposition to the bill. In a letter sent to their colleagues they write:

Despite the current focus on disagreements over funding for the International Monetary Fund (IMF) and the closure of the Guantanamo Bay detention facility, the primary intent of this legislation is to continue funding for the wars in Iraq and Afghanistan. As Members who remain opposed to continued, prolonged or protracted war or occupation on one or more fronts we must make clear our strong opposition and work to defeat this bill. It is notable that attempts to make important changes to the legislation, such as the call for an exit strategy from Afghanistan… have been rebuffed.

Voting down the funds for war honors the mandate to end the war in Iraq that was given to this body by the American people in November of 2006. Furthermore, defeat of the War Supplemental sends a clear message about U.S. priorities at home and abroad.

Sadly, over the past six years Democrats have completely refused to make ending the Iraq War–or even restricting its operation in any substantive manner–a serious issue and instead have repeatedly compromised on funding bills out of fear of appearing as though they don’t “support the troops.” From Obama–who has pursued a policy that will maintain a U.S. presence in Iraq indefinitely–to Michigan Senator Carl Levin, the Democratic Party has been a willing accomplice to the U.S. war, both before the invasion and during the occupation.