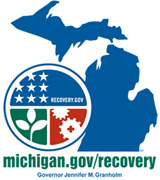 A couple of weeks ago, we posted about the City of Grand Rapids stimulus tracker that allows people to see where money from the federal stimulus package is being spent.

One of the nicer features of the website is a map that allows visitors to track stimulus spending by county. For example, the Kent County map reports that $6.9 million has been designated for home weatherization in the county, $1.5 million for Community Services Block Grants, $854,366 to the Grand Rapids Housing Commission for improvements to public housing in the city, and $400,000 for Brownfield Redevelopment Grants.