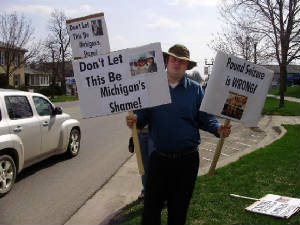 Back in January, MediaMouse.org reported on an ongoing debate in Montcalm County north of Grand Rapids over animal research and the county’s relationship to it. At the time, Montcalm County had just decided to temporarily renew a contract with R & R Research.

Animal advocates have long been critical of a relationship between R & R and the county. R & R received unwanted animals from the county in exchange for disposing of the county’s euthanized animals. Last year, that meant around 150 animals went to R & R. It later sells those animals to research facilities including colleges and hospitals. R & R is under investigation for how it obtains animals by the USDA, while critics charge that the company improperly obtains animals, including pets.

We’re happy to report that following the review of an ad-hoc committee, Montcalm County has decided to end its 30-year relationship with the business.

In response, animal advocates with the group Concerned Citizens Coalition Montcalm posted the following message on their website:

In a 6-3 vote on Monday, April 27th, Montcalm County commissioners voted to end the contract with R&R Research!! We had over 80 people at our rally and well over 150 at the commissioners meeting! Because of all of you, our pets will no longer be sold by a Class B Dealer to be used for research!!

Thank you ALL for your support!!!

Unfortunately, it isn’t too often that MediaMouse.org gets to report on victories, so let’s savor this as an example of what can be done when people undertake solid grassroots organizing campaigns.

Organizers plan to continue their work, shifting focus to a Michigan House of Representatives bill that would ban “animal dealers” from taking animals from public shelters and selling them for research.