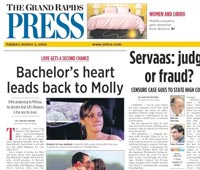 Are we really supposed to believe that this is news? As the economy crumbles, while the planet heats up, while people freeze to death because they don’t have heat, and any number of daily horrors, the Press wants to tell us about “The Bachelor”? All of this comes at a time when the newspaper industry is facing declining readership. Apparently, the Press— which earlier this year trimmed parts of the paper in order to “stay in the game” and whose parent company Booth Newspapers continues to face economic difficulties–seems to think that “The Bachelor” will help its fortunes.

As would be expected, the coverage was “fluff”–stories covered the latest developments on the show, what previous contestants thought about it, and what the Press itself thought about the show. These articles–many of which ran in advance of the program–were essentially advertisements for the reality TV series.

the Grand Rapids Press also ran a number of stories reporting on a theory advanced by a blogger that the series finale would take an unexpected twist–Internet conspiracy theory as news. Beyond that, the Press printed a story about a “live blog” that it hosted on its website during the series finale, treating us to insights from folks going by the names “Sweet Tee” and “guiltywatcher.”

While the headlines (see below) and the coverage of “The Bachelor”–much of which hyped the show in advance of episodes or recapped the previous night’s episodes–are enough to make one sick, perhaps the worst part of the coverage was Grand Rapids Press Editor Mike Lloyd’s defense yesterday of the decision to put the finale on the front page.

In a 900+ word column titled “‘Bachelor’ and front page: A controversial match,” Mike Lloyd wrote that many readers had contacted the Press to express outrage that the television program received front page billing. Mike Lloyd also wrote that there was disagreement within the Press as to whether or not to place the story on the front page, but said that he made the decision himself:

“This front page call came from me. I’d never seen a whole show before, either, but I was among the millions of viewers Monday night. Start to finish. I watched, because at the center was a Grand Rapids girl. Tom’s “big deal” description doesn’t cover it. Comments pro or con are anecdotal and not scientific. But the numbers were overwhelming. the Press M-Live Internet site set records for hits, reader comments, unique browsers and return visitors. The papers featuring Molly on the front page showed increases over the same days the week before.

“The Bachelor” bump was huge.

It’s a great debate, but this was the right call.

See you at the wedding!”

So, in other words, if Internet visits are up, it’s worth it. I guess we can all expect more ongoing coverage–yippee.

All of the coverage of “The Bachelor” in the Grand Rapids Press–and the rest of the local media–is a good example of why alternative media is so important. If the Press wants to feed us fluff, it’s up to the rest of us to create alternative media structures that can publicize what really matters.

“The Bachelor” Headlines: This is News?