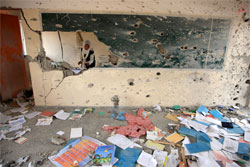 As I sit down to write my monthly column, it is now the third week of intensive Israeli bombing of the Gaza. A United Nations compound was recently hit, as have been a hospital, the Islamic University of Gaza and several neighborhoods. The civilian death toll in the Gaza had reached 700 by mid-January with no end in sight, as the Israeli bombing continues and Israeli tanks and troops have entered the Gaza.

Unfortunately, this is not the general picture that one would receive from the US news media. Probably more than any other foreign policy issue, the US media’s reporting on Israel/Palestine is extremely biased in favor of Israel. There are numerous reasons for this bias–reasons that I want to explore.

First, it is important to acknowledge the US government relations with Israel. Israel has been the number one recipient of US aid for nearly 30 years. On average, the US provides $3 billion annually to Israel in general aid and billions more in military aid. According to Frieda Berrigan with the New America Foundation’s Arms and Security Project, in 2008 the US provided $22 billion in arms sales to Israel. According to the DC-based End the Occupation Campaign, many of the weapons that Israel is currently using to bomb Gaza were provided by the US. Some of those weapons are F 16 fighter jets, Apache helicopters, and TOW, Hellfire, and Bunker Buster missiles. However, if one looks at the print and broadcast media they would be hard pressed to see a single word about US weapons going to Israel.

Second, the US diplomatic relationship with Israel is such that the US has been the only country in the world to consistently stand with Israel when the rest of the world condemns Israeli policy in Palestine. Whenever the United Nations passes a resolution condemning the Israeli occupation the US and maybe one other country will vote with Israel, so it is usually a vote of like 180 to 3 in the General Assembly and only the US blocks a vote against Israel in the UN Security Council. When was the last time you saw the US news media report on UN resolutions against Israel?

The US diplomatic support for Israel is so strong that is consistently receives bipartisan support. Very few politicians are willing to challenge the US support of Israel and those who have were targeted and lost re-election campaigns. Author and former Congressman Paul Findley has documented how politicians in the US are attacked for any criticism of Israel in his book They Dare to Speak Out: People and Institutions Confront Israel’s Lobby

. Every US administration since Richard Nixon has been a staunch supporter of Israel and the new administration are not likely to change that trend. One of the first things Obama did once he sealed the Democratic nomination in June was to go to the largest Israel lobby group in the US (the American Israel Public Affairs Committee – AIPAC) and assure them that he is committed to maintaining US support of Israel.

In early January, while the international community was overwhelmingly condemning the Israeli attacks against the Gaza, US politicians were voting to support Israel. The US Senate voted 80-0 in favor of “Israel’s right to defend itself” and the US House followed suit by voting 390 – 5. Even Liberal Democrats like Senator Carl Levin voted for the resolution, which is no surprise since he has been one of the largest recipients of Israel lobby money over the past twenty years.

Since the military and diplomatic policy is aligned with Israel, it is no surprise that US media coverage of Israel/Palestine overwhelmingly favors Israel. This favorable coverage is due to the fact that most US news agencies depend upon government officials as primary sources and is not inclined to challenge those positions for fear of losing access to these same sources.

Another major reason for the news bias in favor of Israel is that many reporters and news editors know that if they take a critical position against Israel that they will be pressured and possibly attacked by the US-based Israel lobby groups. These attacks will often include accusations of anti-Semitism and possibly even being labeled as Holocaust deniers. The claims of anti-Semitism against those that are critical of Israel are generally not well founded, but who in the journalistic field wants to risk being called anti-Semitic?

This fear of being labeled anti-Semitic even impacts the general public, which is one of the reasons for people to not participate in campaigns that challenge US policy towards Israel. When activists organized rallies against the Israeli bombing of the Gaza in early January some of those activists received hate mail. I also read the comment sections of the Grand Rapids Press and WZZM 13 after they posted stories about the rallies and most of the comments were not only pro-Israel, they accused the Arabs who organized the demonstrations of being supporters of terrorism. One commentator on the WZZM 13 site compared those who condemned Israel’s bombing on Gaza to supporters of Hitler and Pol Pot. The same person said that they hoped that the organizers of the rallies would be put on the US government terrorist watch list.

One additional area of US support for Israel comes from sectors of the Christian evangelical community. Many fundamentalist churches see unconditional US support for Israel as a biblical mandate and even necessary for the Second Coming of Jesus. One of the biggest proponents of this theological interpretation is Rev. John Hagee who is based in San Antonio, Texas. Hagee calls himself a Christian Zionist and devotes a weeklong revival every year to encourage people to support Israel no matter what. Hagee even thinks that Israel should go further with its military policy and advocated in 2006, when Israel was bombing Lebanon, that Israel should have just “dropped a nuclear bomb on that country.” An excellent book that chronicles the history of Christian Zionism is Allies for Armageddon: The Rise of Christian Zionism.

Lastly, the near unanimous media support for Israel is part of a larger cultural hatred of Arabs and Muslims. I highly recommend that people read the work of the late Edward Said (particularly Orientalism

) and Culture and Imperialism

and Jack Sheehan’s important book Reel Bad Arabs: How Hollywood Vilifies a People. The reality is that it is the norm in the US to see Arabs and Muslims in popular culture as terrorists. Whenever you see someone in the popular media wearing a kafia, a traditional scarf for Arabs, it is usually someone who is wielding a gun or burning a flag. These types of gross stereotypes and how the US news media reports on Israel/Palestine are part of what needs to be changed if the public perception of what is happening in the Middle East is ever to change.

Jeff Smith is a regular contributor to http://www.mediamouse.org and does workshops on media bias & racial stereotyping in the media.