A new effort aimed at distributing 30,000 CDs containing racist white power music has been launched and specifically targets youth aged 13-19. The CDs have turned up in Grand Rapids. 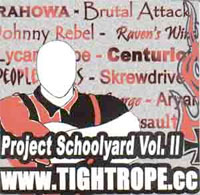 A new white supremacist effort aimed at distributing thousands of CDs containing racist music is targeting middle and high school students across the country, including in Michigan.

The campaign–dubbed “Project Schoolyard Volume II”–intends to distribute the CDs as a means of recruiting new members and spreading the “white power” movement to teenagers. The distribution campaign is a follow-up to a 2004 effort that allegedly distributed 50,000 racist CDs to students aged 13 to 19. The latest CD features 25 songs with titles like “Some N****rs Never Die,” “White Revolution,” “White Pride, White Passion,” and “Race Riot” from a variety of bands including the more well-known Skrewdriver and RAHOWA (RAcial HOly WAr). The CD’s marketing boldly proclaims, “Remember, we don’t just entertain racist kids, we create them.”

Thirty-thousand copies of the “Project Schoolyard Volume II” CD have been produced and they have reportedly been sent to distributors across the United States. Already, CDs have shown up in Michigan, with copies distributed last Friday at the “Carnival of Chaos” show at the Intersection in Grand Rapids. In the past, racist propaganda has been distributed by the National Alliance at concerts in Grand Rapids.

A company called Tightrope distributes the CD. Tightrope’s website boasts the slogan “It’s not illegal to be white… yet” and features the image of a fist clenching a noose. On it, Tightrope sells a host of racist merchandise and even offers a page of “jokes” about African-Americans. Tightrope’s founder–Bryant Cecchini (pictured on the right with David Duke)–has been a skinhead since the age of 17 and denies that the Holocaust happened. The Southern Poverty Law Center quoted him saying “Your average kid really don’t give a damn about paint scrapings at Auschwitz… If you put it to music, they’ll listen to it twice before breakfast every day.”