An investigation by PETA has uncovered widespread abuse of turkeys at one of the nation’s largest poultry companies. The undercover video investigation shows workers torturing, mutilating, and maliciously killing turkeys. 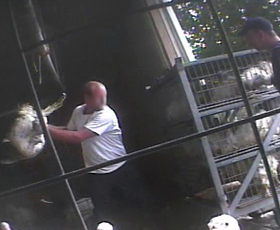 PETA’s investigator brought the abuses to a suprervisor’s attention. However, the supervisor responded by saying “Every once in a while, everybody gets agitated and has to kill a bird.”

The group has released a video–albeit quite disturbing–that documents some of this mistreatment:

Among the abuses documented:

* Employees stomped on turkeys’ heads, punched turkeys, hit them on the head with a can of spray paint and pliers, and struck turkeys’ heads against metal scaffolding.

* Men shoved feces and feed into turkeys’ mouths and held turkeys’ heads under water. Another bragged about jamming a broom stick 2 feet down a turkey’s throat.

Aside from these abuses, PETA reports that “the usual” horrors of factory farming are present at Aviagen, including cramped conditions, dead birds mixed in with living ones, cutting of birds’ beaks with pliers, and overfed birds dying of exhaustion or heart attacks.

Given that 72 million of the nearly 270 million turkeys killed in the United States are killed for holiday meals, PETA is asking people to give up turkey this Thanksgiving. Additionally, the company has setup an online letter generator to help people write to the National Turkey Federation to encourage it to recommend that turkey breeders adopt PETA’s animal welfare plan.