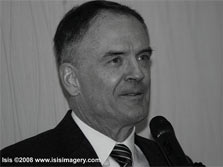 Michigan State University’s (MSU) chapter of Young Americans for Freedom (MSU-YAF)–a rightwing student group that has been declared a “hate group” by the Southern Poverty Law Center–has cancelled a planned speech by Jared Taylor. Taylor, who is the editor of the American Renaissance newspaper, is a prominent racist who advances a form of “scientific racism” that argues that there are innate differences between races. Beyond that, Taylor has ties to various elements of the racist right.

A little over a week ago, the Taylor “event” was deleted from Facebook–a popular social networking website–by Young Americans for Freedom’s chairman Kyle Bristow. At the time, there was no explanation, but a post on Young American for Freedom’s blog indicates that the speech at Michigan State is cancelled and that Young Americans for Freedom is not sponsoring the event. MSU-YAF’s chairman Kyle Bristow wrote, “Though MSU-YAF is not officially hosting Jared Taylor as a speaker this semester, I did see to it that he will be able to speak at a location near MSU and be hosted by another organization (the show will go on!).”

While it is certainly good news that Taylor’s speech at MSU has been cancelled, it is worth remembering that Bristow has found another location for Taylor to speak in Michigan.

Finally, in related news, Taylor’s biannual American Renaissance conference in Washington DC was met by protests. According to reports on DC Indymedia, protestors were able to disrupt and interfere with Taylor’s gathering of racists. A report from the anti-racist website One People’s Project noted several prominent racists who were in attendance:

“Inside, noted individuals such as Holocaust denier Mark Weber, Croatian hatemonger Tomislav Sunic, who was at a meeting at the Sala Thai Restaurant in Arlington, VA earlier in the week, and Canadian fascist Paul Fromm, who now that he has been removed from his teaching position is promoting a fight against political correctness, stayed away from the fray. There were about 150 who attended the conference, some actually persons of color. Among them was Marcus Epstein, the Executive Director of Pat Buchanan’s organization the American Cause. The night before, neo-Nazi Bill White said he had attended the conference and he complained about their presence on his email list. He chose however, not to be around on Saturday, when the protesters came out.”

Additionally, One People’s Project has released a list containing the names and home states of some of the conference attendees. Nobody from Michigan is on the list.