On Friday, Michigan State University’s Young Americans for Freedom (YAF) is bringing Nick Griffin–a holocaust denier affiliated with the British Nationalist Party–to MSU. In response to Griffin’s visit and YAF’s history of bringing racist speakers to MSU, people are organizing against the speech. 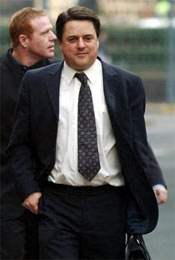 Michigan State University’s (MSU) chapter of Young Americans for Freedom–a student group that has been identified as “hate group” by the Southern Poverty Law Center–is bringing Nick Griffin to speak at MSU on Friday. Griffin, who is the leader of the British National Party (http://www.stopthebnp.org.uk/), has a history of holocaust denial and opposition to Muslim immigration is visiting MSU’s campus as part of a fundraising tour. According to the Southern Poverty Law Center:

“Griffin, a well-known Holocaust denier and anti-Semite, has a long history of extremism reaching back into the late 1970s, when he was active in the racist British National Front. In 1998, he was convicted of incitement to racial hatred, a serious offense in Britain. Griffin is also a regular visitor to the U.S. and frequently speaks at extremist events here. A recent example came in February 2006, when he spoke at the biannual conference of the publisher of American Renaissance magazine, a hate group that argues that blacks are more “pathological” and less intelligent than whites. Griffin is also close to former Klan leader David Duke, at whose events he also often speaks. The BNP and Duke’s European Unity and Rights Organization (EURO) share the same Belgian webmaster.”

In response to Griffin’s appearance and the continuing sponsorship of racist and homophobic speakers by MSU’s chapter of Young Americans for Freedom–the group has hosted anti-immigrant Representative Tom Tancredo, Chris Simcox of the Minutemen, Mark Krikorian of the Center for Immigration Studies, and Ryan Sorba–people are organizing in Lansing to oppose Griffin’s talk. The following call to action call to action has been posted on the Michigan Against White Supremacy website:

The hate group msu young americans for freedom (yaf) is bringing Nick Griffin of the British National Party to speak on the Michigan State University campus this friday october 26th. Griffin is a white supremacist, holocaust denier, homophobe and all around racist. Griffin has stated that Islam is a “wicked, vicious faith” and that Muslims were turning Britain into a “multi-racial hell hole”(1).

Griffin has called the Holocaust the “Holo-Hoax” and wrote that, I am well aware that orthodox opinion is that 6m Jews were gassed and cremated or turned into soup and lampshades… I have reached the conclusion that the “extermination” tale is a mixture of Allied wartime propaganda, extremely profitable lie, and latter witch-hysteria.'(2)

So people are disgusted but the question is, what are we going to do about it? The University, time and again, refuses to do anything about the hate speech and bigotry that YAF pretends is part on an intellectual debate when the only thing their events do is make people feel less safe and intimidated. The time for begging the university for protection has passed. It is now up to the people, people like us to deal with white supremacists like Griffin and the people who bring him here.

A recent BNP function in Britain was effectively shut down by protestors who prevented members of the Party from entering the building where the meeting was being hosted.